Does America Need Another Phyllis Schlafly?

Editor’s note: The following is an excerpt from the April 2019 edition of the CBMW Newsletter, a monthly ministry update that features exclusive editorial content from CBMW Executive Director Colin Smothers. We are posting part of this month’s newsletter editorial here to give non-subscribers a chance to read it and have the opportunity to sign up here to receive CBMW’s monthly newsletter in your inbox.

It’s likely only political history buffs and those who lived through the 1970’s know the name Phyllis Schlafly, but those who do probably remember her for her opposition to the Equal Rights Amendment, or E.R.A. The E.R.A. was a proposed amendment to the US Constitution that on the surface seems benign and common-sensical in its attempt to equalize rights for men and women. The text of the amendment almost fits on one line:

“Equality of rights under the law shall not be denied or abridged by the United States or by any state on account of sex.”

Who could argue against that? One could be forgiven for not understanding, at least initially, why Schlafly and her supporters were so staunch in their opposition to it.

But the implications of this amendment could not be more massive, and these implications are why the name Phyllis Schlafly is still relevant today. Schlafly’s main opposition to the amendment was rooted in the conviction that men and women are different, not interchangeable, and that the law should recognize this reality. If the law fails to recognize the inherent differences between men and women, then everything from male and female bathrooms to continuing to exempt women from the national Selective Service register would be unconstitutional.

Schlafly was ultimately successful in her campaign to stop the E.R.A. It failed to gain the 38 state legislatures needed to pass the amendment. Interestingly, some E.R.A. proponents are still attempting to push it through those states that have yet to approve it, even though some legal scholars argue that the time has expired for the amendment to be adopted as proposed.

The New York Times recently published a fascinating, must-read article by Helen Andrews that mentions Schlafly and her fight against the E.R.A. by name. The title: “Where Are the Socially Conservative Women in This Fight? The American family needs defending and right now men are leading the charge.” The article wonders aloud who may be the next Phyllis Schlafly to take up the cause of the American family in crisis.

While Schlafly was successful in her campaign against the E.R.A., Andrews rightly points out that what she feared would follow from the amendment’s passage has found other avenues into culture and law. Andrews writes, “[N]early everything that Schlafly warned that E.R.A. would bring about has been achieved by other means, from coeducation at military academies to gay marriage.”

Andrews goes on to highlight the paradox of the “women’s liberation” movement that has left women less free to do what they want.

“The obstacles to expanding women’s options and empowering them to make the choices they want are now, in many areas, precisely the products of that egalitarian revolution. By making it easier for women to pursue success in the workplace, we have made it harder for them to do anything else. Pressing the brake on the trends set in motion by the feminist revolution would leave women more free to follow a diversity of paths. In that case, another Phyllis Schlafly may be just what America needs.”

The result of this egalitarian revolution, according to Andrews, has been the breakdown of the American family:

“The American family is once again in crisis. The statistical bellwether this time is not family breakdown but failure of families to form in the first place. In 1960, 82 percent of Americans between 25 and 34 were married. Even as late as 2000, 55 percent were. In 2013, for the first time, a majority of that age bloc had never married, and the downward trend shows no sign of stopping. Even allowing for the likelihood that some of this cohort will marry in their 40s or 50s, a 2014 Pew report predicts that ‘today’s young adults will experience the lowest marriage rate in modern history.’”

The data Andrews cites are alarming on their own, but visualizing these trends elevates this crisis to a whole new level. Consider these two graphs from a 2017 report published at the request of Senator Mike Lee: 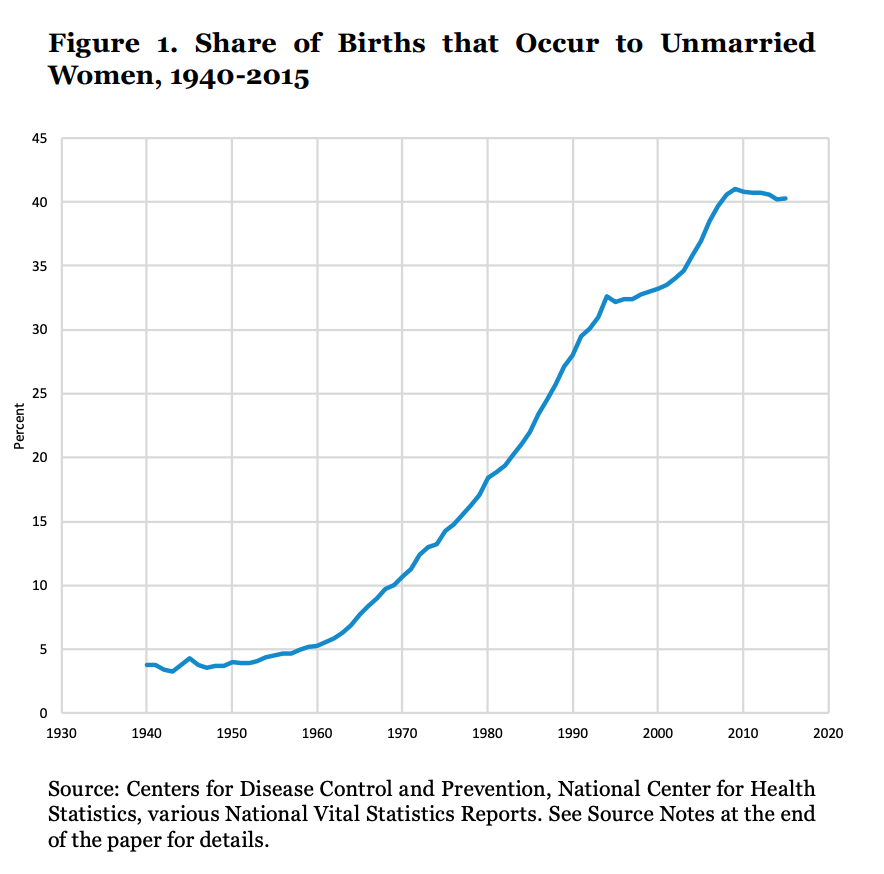 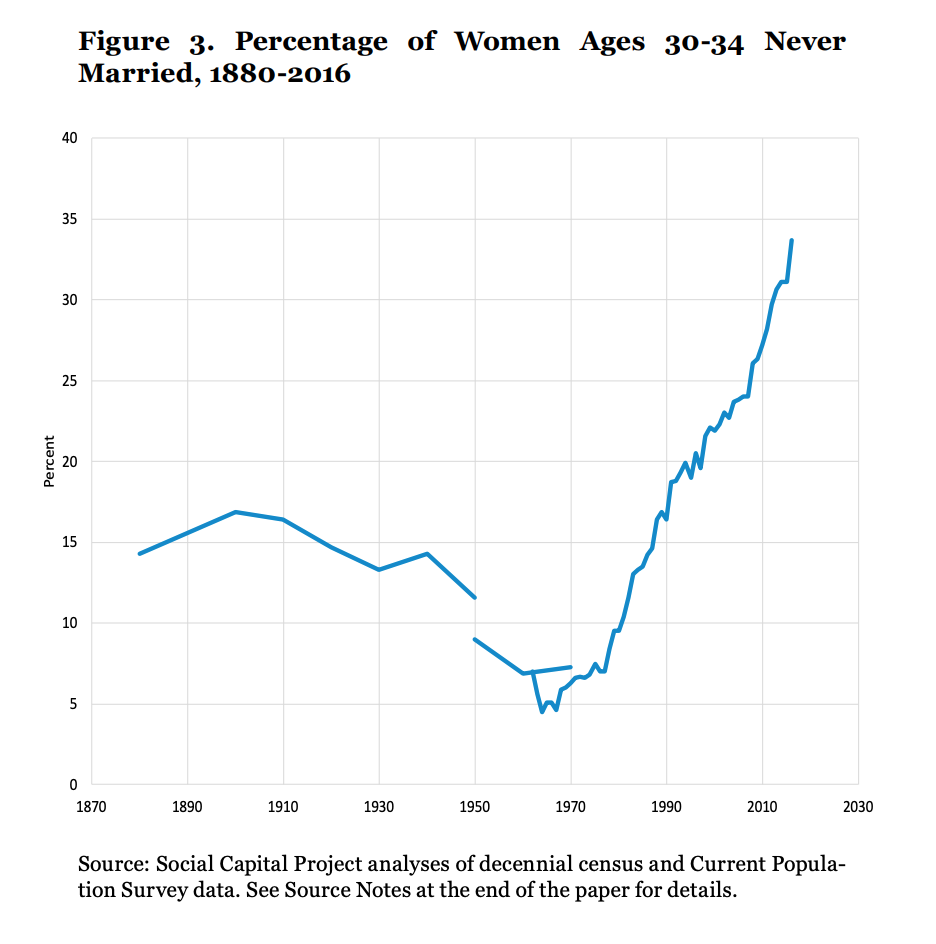 In both graphs above, a noticeable and dramatic trend begins around the late ‘60’s and early ‘70’s. Not coincidentally, many mark this time period as the beginning of the sexual revolution and also when second-wave feminism was just starting to gain traction—two of the very forces CBMW formed in response to in 1987.

Is another Phyllis Schlafly what America really needs to counter such radical, society-killing trends, as Andrews suggests? A quick glance at what is making the headlines—and also what isn’t—makes the question a legitimate one. For instance, just last week, a Congressional committee listened to testimony for and against female registration in the national Selective Service register. Southern Seminary’s Mark Coppenger gave moving testimony, which I cannot recommend more highly, against the proposal, and CBMW is working even now to submit written testimony against it as well. Why would such a significant debate not get more news coverage?

More to the front page of the national conversation is the Equality Act, an attempt to codify the most radical proposals of the sexual revolution into law. This act would redefine “sex” in the 1964 Civil Rights Acts to include sexual orientation and gender identity. Andrew T. Walker of the ERLC sums up the threat of this bill: “It communicates that Christian beliefs about what it means to be male and female, and how marriage ought to be defined, are incompatible with what U.S. law considers to be decent, reasonable, goodwill convictions.”

One more example of familial degeneration in the West will have to do. Last week news came out of Canada that a father was being charged for “family violence” by the British Columbia Supreme Court for refusing to affirm his daughter’s new self-identity as a boy. As if that weren’t enough, the Court also ordered the father’s arrest in the event that he ever in the future refers to his daughter as, well, his daughter.

What is to be done? As Christians, we must continue to hew closely to the Scriptures as the final arbiter of truth and beauty and goodness. And we must continue to believe that God’s way revealed in God’s Word and God’s world is what is good for us and all people. In so doing, we will reject man-made egalitarianism in favor of God-ordained complementarity and authority. We will reject man-centered definitions of marriage and sex in favor of the God-initiated covenant of marriage between one man and one woman for the purpose of raising the next generation and symbolizing the gospel. And we will reject man-destroying concepts of sexual orientation and gender identity in favor of God-given sexuality and gender.

God has given us all we need for life and godliness in the Scriptures. While the church doesn’t need another Phyllis Schlafly to survive the coming days, we Christians do need to stand, come what may, on the Word of God amongst the people of God with a sure faith in the One by whom, through whom, and for whom all things were created.